Exclusively made from Chardonnay, Chablis is the most famous white wine of the Burgundy region. The Chablis vineyard is composed of 4 appellations with different requirements in the growing order of importance: Petit-Chablis, Chablis, Chablis Premier Cru and Chablis Grand Cru. Located near the Champagne region, the Chablis climate is much cooler than elsewhere in Burgundy. The vineyard is more exposed to the risk of frost. It is the unique terroir of Chablis that offers wines of inimitable purity, freshness, finesse and minerality. They pair perfectly with fish and seafood! Discover our selection of quality bottles all blind tasted to assure their quality. 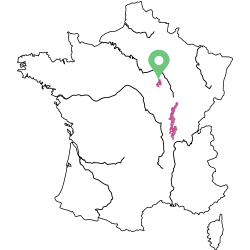 IMPORTANT THINGS YOU NEED TO KNOW ABOUT CHABLIS WINES

Chablis is a dry white wine with a registered designation of origin (AOC) produced in Burgundy in the municipality of Chablis with Chardonnay as the only grape variety. Chardonnay bunches are relatively small, cylindrical, less dense than those of Pinot Noir, made up of irregular, fairly small, golden yellow grapes. Since the 13th century, Chablis wines have enjoyed a successful expansion, both geographically and commercially, and have contributed to the general enrichment of the city, of which they have long been the main source of income.

The region of Chablis is the northernmost French wine region in Burgundy. The vineyards around the city of Chablis are almost exclusively composed of plantations of the Chardonnay vine, which give a dry white wine renowned for the purity, aroma and taste. The cool climate of this region is responsible for the production of wines with more acidity and less fruity flavours than the Chardonnay wines produced in warmer climates. The sugar content of the Chardonnay berries can reach high levels while maintaining a high acidity, which makes it possible to obtain wines that are particularly well balanced, powerful and ample, with a lot of richnesse and volume.

All Chablis vineyards are covered by four appellations of origin with different levels of classification, reflecting the differences in soil and slope in the northern region of Burgundy. The following are the four appellations with their respective dates of establishments:

The Chablis Grand Cru is produced from seven different vineyard sites which are: Blanchot, Bougros, Les Clos, Grenouilles, Les Preuses, Valmur and Vaudésir. The Grand Cru is the most precious of Chablis appellations as the grapes come from the best vineyards.

Chardonnay grows healthy in clay soils particularly well in deep soils, like those of Burgundy, France, known for its high clay-limestone soils. In the best vineyards the limestone is overlaid with a layer of Kimmeridgian clay, that is rich in marine fossils.

After the harvest, the wine is taken to the press and transferred to either stainless steel tanks or oak barrels for settling and alcoholic fermentation. Afterwards, it often undergoes a malolactic fermentation, where malic acid is converted into softer lactic acid. Then maturation is done depending on the type of Cru desired. Compared to white wines from Burgundy, Chablis is on average much less influenced by ageing in a new oak barrels. The basic Chablis is vinified in stainless steel tanks with controlled temperature.

When the eventual maturation in the cask is carried out, it is a stylistic choice followed only by some wine-producers. Many Grand Cru wines mature for a short period of time in oak barrels. Then fining and filtration is done to obtain wines of better balances.

Colour: Petit Chablis wines have brilliant pale gold colour, rye-straw, sometimes with a greenish shade. Chablis colour is light greeny-gold, then Chablis Grand Cru is pure green-gold tending into a light yellow as it ages. The green-gold colour of the Chablis wines is a result of the characteristics of Chardonnay.

Nose: On the nose; Petit Chablis has aromas of white flowers mixed with citrus notes (lemon, grapefruit), with a mineral base flint, sometimes notes of peach can also be found. In Chablis, aromas of citrus, green apple, and pear can be found with more pronounced mineral notes due to the prevalent chalky white limestone soils.

Palate: on the palate, Petit Chablis is light with well-balanced acidity. The Chablis has more depth and flavour than Petit Chablis. Premier Cru; has slightly richer fruit profiles than the previous ones and well-balanced acidity. Grand Cru is much more concentrated than the other appellations wines. Depending on the producer, the wine will be clearly marked by minerality, or by fruity and woody notes.

Generally, Chablis wines are dry and they have a great length in the mouth i.e the aromas persist at length

Due to the freshness and mineral notes, Chablis wines go well with oysters, lobster, fish, shellfish dishes, but also with white meat, goat cheese, snails, prawns and poultry. Because Chablis wines are light and delicate, these dishes would make the wine taste thin and lose the fruit aroma. So, lean towards white pepper and low spiciness in dishes.