The exuberant white grape variety of the Iberian Peninsula

A white grape variety from the northwestern Iberian Peninsula, Albariño is able to adapt to a variety of geographical conditions but prefers oceanic settings. Its success has opened up new horizons beyond Spain and Portugal: Australia, Chile and the United States. Most often grown as a single grape variety, it produces succulent, crisp and lively white wines such as Portugal's famous Vinho Verde DOC or Galician Rias Baixas DO.

WHERE IS IT FOUND? 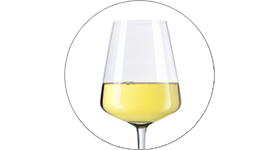 Pale colour with green reflections, a little more sustained when the wine is matured in barrels, which is the case of the Rias Baixas.

Mouth reveals a pronounced acidity that is a guarantee of freshness even though these are wines with a high alcohol content. One finds the generosity of the aromas under the palate with a touch of saltiness.

FOOD AND WINE PAIRINGS
Albariño and its accompaniments

The north-western tip of Portugal, the Minho region, between the Spanish border and the Douro river which flows into the Atlantic near Porto, the culture of the Albariño is ancestral. It dates back to antiquity shortly after the arrival of the Romans. It was during the Renaissance that vinho verde was first used, when the Portuguese navy exported wine across the oceans, setting up trading posts from China to Brazil, from Greenland to Goa. An already sought-after wine back in the day.

Its name refers to the freshness of its youth, more than to the colour of the wine, as Albariño is known for its beautiful acidity. The grape variety is harvested almost green before maturity and the harvest is early to avoid climatic damage.

Vinhos Verdes can be made from varietal or single grape variety wines. Blending can be done with Arinto, Avesso, Azal Blanc, Batoca, Loureiro and Trajadura. Traditionally, the vines are cultivated in pergolas (Ramadas) where the vines are grown high up. This is a rare way of cultivating vines for wine production. That said, many winemakers have returned to a more modern culture that guarantees a slower maturity. The wine is matured on prolonged lees (on its yeasts) and aged in barrels.

Ideal companion for aperitifs on the terrace, it goes well with the local cuisine from the sea.

Conservation: Up to 10 years.

RAIS BAIXAS, THE MOST PROMINENT OF THE SPANISH WHITE WINES

Located 50 km between the Galician coast and the river valleys of the hinterland, the appellation contains 5 sub-regions (Val do Salnes, Condado do Tea, O Rosal, Soutomaior and Ribeira do Ulla. Here the Albariño is king.

Rias Baixas DO are white wines fresh in the mouth, balanced and full of nuance.

Highly appreciated outside Spain, they are exported a lot abroad. They have conquered the world with their seductive aromas. An obvious commercial success that has only reinforced the quality of the appellation's wines over the years.

Some Rais Baixas include grape varieties other than Albariño, other indigenous varieties such as Caiño Blanco, Loureiro and Treixadura for example. However, it is still Albariño that dominates in the blend (at least 70%). Among these DO (Denomination of Origin) appellations are the Rias Baixas Condado de Tea, the Rias Baixas Rosal, the Rias Baixas Ribera do Ulla, the Rias Baixas Salnés, and the Rias Baixas Barrica, the latter having been aged for at least 3 months in oak barrels. All of them have very intense aromas.

Those from the Albariño mono-varietal, the Rias Baixas Albariño, have fine, more floral aromas with a stronger acidity than those from the blends with a much more pronounced freshness.

Wines that complement the emblematic product of Galicia: the scallop. As an accompaniment or even used in recipes, such as the starter made especially for Valentine's Day, Vieiras al albariño.