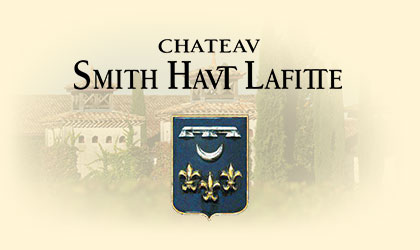 After careers as skiers, the Cathiard family bought the Smith Haut Lafitte estate in 1990, a real jewel whose name has been one of the most emblematic of Bordeaux wines for several centuries. Driven by the desire to produce one of the best wines in the world and aware of the richness of their Pessac-Léognan terroir, the owners combine ancestral methods (manual harvesting, compost making, ploughing on horseback, total elimination of herbicides) and new technologies. On these same lands, their daughter Mathilde and her husband Bertrand created the first Vinothérapie® spa and the cosmetics brand Caudalie®.

A bit of history:

The origin of the estate dates back to the 14th century with the house of Verrier Du Boscq who planted vines on a gravelly plateau called Lafitte in 1365. In 1720, it was bought by the Scotsman Georges Smith who added his name to the place and built the manor house of the property.

The company Louis Eschenauer bought the estate in 1958, having already been distributing the wine since the beginning of the 20th century. In 1990, Daniel Cathiard bought Smith Haut Lafitte and embarked on an investment program, including the construction of a new winery.

The vineyard extends over 67 hectares, of which 56 hectares are planted with grapes, including 55% Cabernet Sauvignon, 35% Merlot and 10% Cabernet Franc. The remaining 11 hectares are cultivated with white varieties, 90% Sauvignon Blanc, 5% Semillon and 5% Sauvignon Gris.

The production of the premier cru Château Smith Haut Lafitte represents an annual volume of 10,000 cases of red wine and 2,500 cases of dry white wine. The second wine called Les Hauts de Smith, with a production of 5,500 cases, is available in red, white and rose. The rose is classified a Bordeaux AOC. There is an alternative second wine called Le Petit Haut Lafitte produced exclusively as a red wine with a higher Cabernet blend - this second wine is growing in popularity.

→ Maturity: Within 5 to 15 years depending on the vintage.